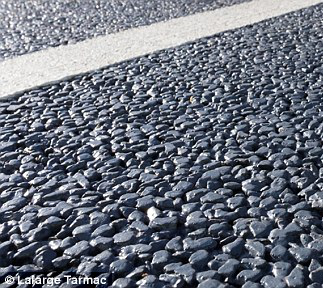 A British company has developed a new kind of concrete that could ease the heavy damage that floodwater can bring.

The concrete forms a super-absorbent surface covering that allows water to seep through.

The engineers say it lets flood water spread down into the earth where it lands, rather than being pooled and channelled by impermeable concrete.

They said it would help to make roads or cycle paths safer as well - preventing puddles that could pose a risk.

The high-tech concrete works by having a permeable layer on top, which allows water to drain through a matrix of large pebbles and then down into a loose base of rubble beneath.

“Permeable concrete allows surface water to freely drain through the wearing surface to the underlying ground with the ability to act as a reservoir during periods of high downfall,” the company behind the innovation, Lafarge Tarmacs, said.

“During these periods this characteristic can aid in delaying the discharge of surface water into water courses or drainage systems reducing the risk of overwhelming systems and causing flash flooding.

The following video of the material being tested shows the concrete 'drinking' 4,000 litres of water in around a minute.